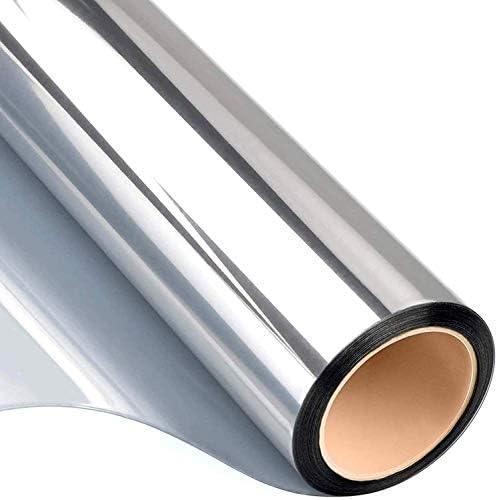 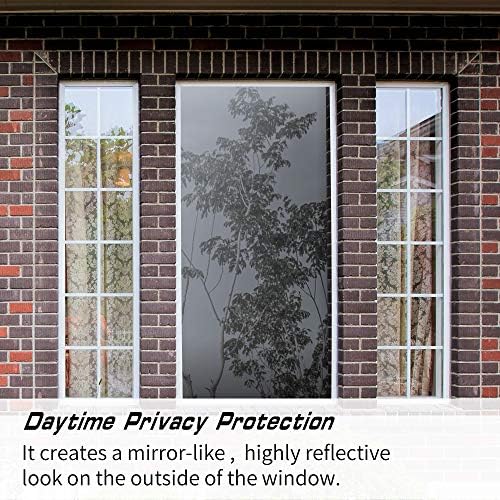 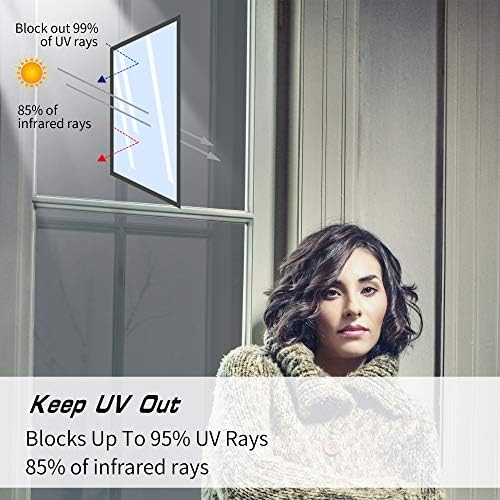 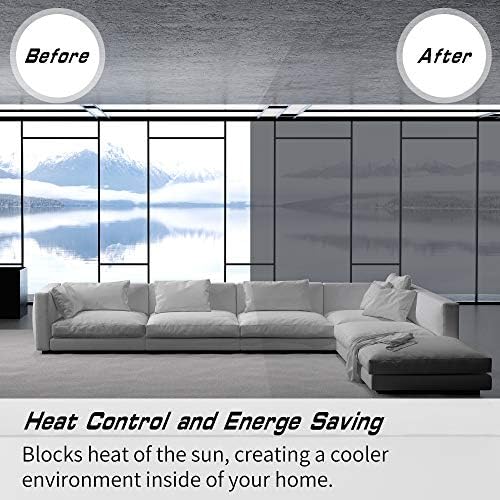 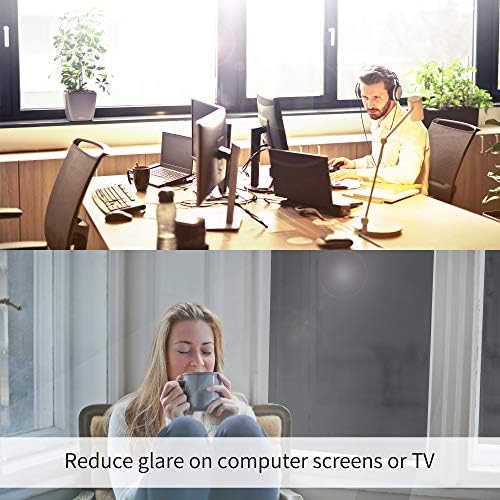 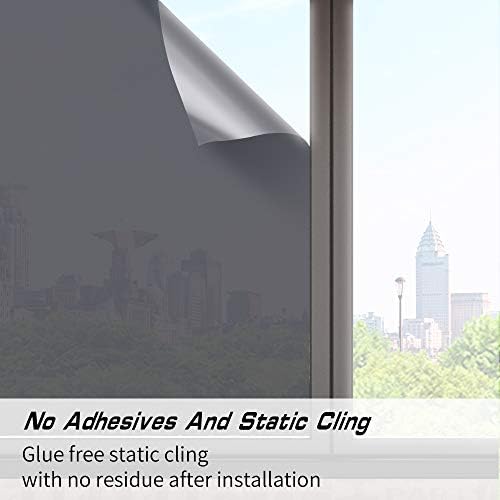 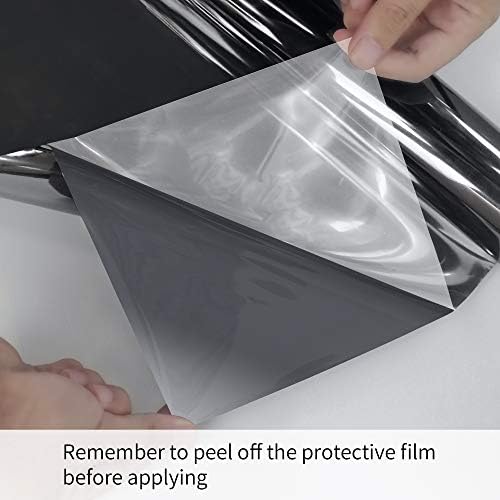 Key Features of This One Way Mirror Window Film:

The one way window film is designed for daytime privacy protection. It creates a mirror-like, highly reflective look on the outside of the window. You will no longer have to worry about being disturbed by neighbors or strangers.

The window privacy film can also reduce the amount of heat transmitted through window glass by reflecting some of the infrared rays back outside. With our glue-free design, it is easy to install, without worried about left residue after removal.

Creates excellent one-way visibility and daytime privacy. The mirror-effect is reversed at night since the interior will be exposed to more light than the exterior, the side with the most light will have the mirror-like appearance.
Dark and reflective to create a mirror-like appearance while reducing cooling costs during the summer through effective heat rejection
Strong enough to last years, for easier installation, remember to use soap water to wet both the adhesive side and window
Visible light transmittance / vlt : 10%. ( 5% = very dark. 15% = dark. 35% = lightly dark. 50% = light. 65% = very light)

Please always remember to take caution when handling the film as the slightest fold could create a permanent wrinkle.

NOTICE: The inside light is stronger than outside at night, the mirror reflective effect will disappear. Do remember to draw curtain during night.

Ablave silver reflective window films gives excellent daytime privacy, provides great intended privacy during daytime only; the mirror-effect is reversed at night since the interior will be exposed to more light than the exterior, the side with the most light will have the mirror-like appearance. It sets the industry standard as one of the most powerful and economical solar heat rejecting films providing maximum heat rejection by being the first line of defense against solar heat and glare.

The Advantages of Window Film

What do you do when you have a beautiful view out your bedroom or office window? Many people believe they have only two options: cover up the window – and the view – with heavy draperies to keep prying eyes out or keep the window in but give up privacy. One way glass film gives you a third option. You can see out crystal clear yet others can’t see in. Let the light shine in and brighten up your home, keep your view, and enjoy the location of your home or office – without feeling like you’re on display.

Stop storm debris, falling palm fronds, golf balls and more from shattering your windows and sending shards of glass through your home by adding privacy window film. While window film does not make your windows shatterproof, it does increase their strength. Stronger windows also make it more difficult for intruders to enter your home. Along with being more difficult to break, if the window is broken the film keeps the pieces within the film, which makes it harder for an intruder to make a stealthy entrance and exit.

SAVE ON UTILITY BILLS

One way privacy window film can help to protect you from theft and provide daytime privacy, but did you know that it can also make it easier on your wallet? Window film blocks the heat of the sun, creating a cooler environment inside of your home. As a result, it costs less energy to cool your home, leaving you with cheaper energy bills.

Anyone who’s worked in an office without films, or tried to watch TV in the middle of the afternoon in a sunny room, knows who aggravating glare can be. It can cause headaches, make it virtually impossible to see what’s on the screen or TV, and be a huge distraction. The good news is that two way films can significantly reduce or even eliminate this glare.

How to Install this window film?

CLEAN WINDOW Generously spray the glass with application solution, on the side where you plan to apply film. Use a razor blade to remove stubborn dirt or paint. Spray again, then squeegee downward. Wipe off accumulated dirt from lower edges and/or gaskets with the low-lint cloth. If possible, also clean the outside of the glass. This will be visually helpful to ensure you’ve fully cleaned the inside surface.
MEASURE AND CUT FILM Unroll the film on a clean, flat surface, with the film’s natural curl (liner-side) facing down. Carefully measure your window before cutting. Cut the film at least one inch larger than the glass on all four sides. The excess will be trimmed once film is applied.
LOOSEN CLEAR LINER Loosen a corner of your film’s clear liner now, to make future steps easier. Keep your film flat and select an upper corner. Attach just the end of a three-inch piece of transparent tape to each side of the corner, folding the free tape end to make a “pull-tab.” Next, peel the two tabs of tape sharply apart, separating the layers just a bit. You’ll pull them fully apart later.
WET GLASS AND FILM Generously spray application solution onto the glass surface and both sides of the film (to reduce static electricity during liner removal in the next step).
REMOVE CLEAR LINER If you have a helper, he can continue holding the film for this step. Grasp the two tabs of tape you attached in step 3 and use them to help you slowly pull the liner away. As you pull, completely saturate the exposed, adhesive side of the film with application solution. Continue peeling and spraying until three or four inches of liner is still attached at the bottom. This will help prevent curling.
APPLY FILM TO WINDOW Take the film from your helper, holding the film by the upper corners with the adhesive side facing the glass. Allow the film to flow onto the glass, aligning any straight factory edge with a straight edge of the glass. All non-factory edges of the film should overhang the glass edges by one inch. Once the film is in place, completely remove the loose liner as you hold the film in place.
SMOOTH FILM IN PLACE Spray the entire surface of the film again with the application solution. Use the squeegee card to firmly press down the film in a strip at the center, moving from top to bottom of glass. This single downward stroke immobilizes the film and prevents movement while you work. Using firm, overlapping push strokes with the yellow squeegee card systematically press out the application solution in horizontal strokes, left and right, from the middle outward, starting at the top moving slowly downward. Leave a two-inch edge around the outside of the glass un-squeegeed.
TRIM FILM EDGES Place the razor point of the trim tool into an upper corner, push it through the film, and gently pull the tool downward, while pushing slightly outward using the window frame as your guide as you trim along the frame. Cut close and straight. Repeat this process on all untrimmed edges.

Window Film Comes Off? Please Remove the Backing Film, spray A LOT OF WATER on film and window, squeeze out all air bubbles.
HEAT INSULATION AND ENERGY SAVING – This window film blocks out 90% of infrared rays and 85% of UV rays reducing fading and aging of interior furnishings. The heat control window film can retain heat in winter and keep it out in summer, reducing expensive heating and cooling costs
STATIC CLING AND NON ADHESIVES – This window film is no-glue, which can be fixed and removed easily without any traces left. So, it can be reused even after several years if not be damaged or smudged. Remember to use A LOT of soap/water mixture to soak both the adhesive side and window
EFFECTIVE UV PRETECTION – UV solvents added at the bottom, the window reflective film effectively blocks out 95% of UV rays, and reduces fading and aging of interior furnishings,with anti-scratch layer on the surface, friction resisting, won’t fade nor blister, easy to remove, economical and practical
DAYTIME PRIVACY PROTECTION–The window film provides great intended privacy during daytime only; the mirror-effect is reversed at night since the interior will be exposed to more light than the exterior. The side with the most light will have the mirror-like appearance. Remember to draw curtain during night

There are no reviews yet.

Added to wishlistRemoved from wishlist 0
Add to compare

Added to wishlistRemoved from wishlist 0
Add to compare
$26.99